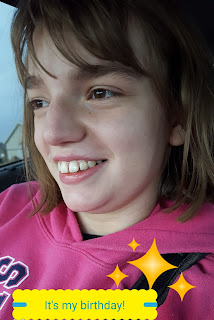 I have to admit that your smiling every time I sang Happy Birthday to you made me very happy.  I know the smile was not because my singing is so awesome - I know it's because you understood that it was your birthday.


I cannot believe that my little angel baby is now 16 years old and that twelve years have passed since our lives were forever changed by the negligent actions of someone else.

Mackenzie is now a Sophomore in High School.  She should be having sleep overs, driving, and dating.  But she isn't.
Most days are difficult because she hollers much of the day.  It is incredibly nerve racking and, as we have discovered; no amount of talking to her, negotiating with her, or yelling at her will put an end to it.  I love her so very much and I only want her to be happy more often.

The other evening when her younger brother and sister were jumping from the sofa to the bean-bag chair, Mackenzie appeared to be turning her head trying to watch them.  Her father then turned her chair to enable her to better see them.  She began watching and laughing.  Moments like this are rare.  It is so difficult to find anything to make her smile – laughing is even more rare. 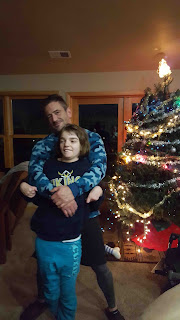 But I love her, I always have and I always will – I just wish I could do more for her to make her happy more often.
Posted by Unknown at 8:00 AM 1 comment: 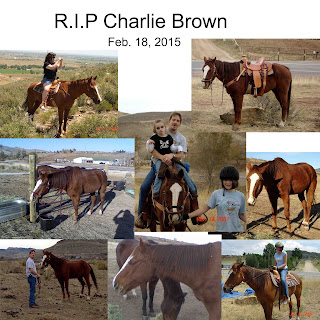 On February 18, 2014, Mackenzie's beloved horse succumbed to the rigors of old age and passed away.  He was an excellent therapy horse and we will miss him!

Posted by Unknown at 2:19 PM No comments:

On December 28, 2004, I hugged my daughters goodbye as a boarded a plan to leave the country for  four months.  It was the to see a part the world that I otherwise would not ever be able to experience, and I was doing on the government's dime.  I had no idea that hug would be the last one I was to ever receive from my youngest child.


Ten years ago today, January 27, 2005, at 4 years-11 weeks- 5 days old, my daughter suffered a non-fatal drowning at the hands of the inept YMCA staff.  Non-fatal you ask?  Yes, she survived - she is alive.  However, her brain suffered a traumatic injury from being without oxygen for more than 4 minutes.  She will never be the same.

If I had known I'd lose her 31 days later, would I still have gone?  Hell no.  I would have spent every moment of every day of that last month with her, loving her, hugging her, and enjoying her company and her amazing personality.


She learned to ride a bike at age 3 and was fortunate to have seen Disney World twice.  She was born in San Antonio, Texas and had already traveled much of this country, and some of Canada and some of Mexico, before she turned 4.  There is so much I would love to share about her, but there isn't the time or the space here.

She smiled almost all the time and rarely fought with us or with her sister.  She didn't throw many tantrums.  She was happy and everyone loved her. 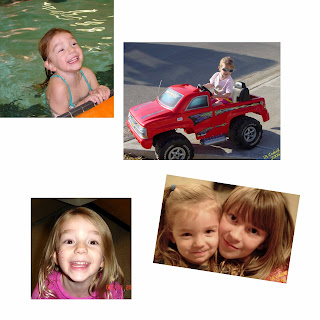 The one big fight we always had with her was at bedtime.  She always wanted her mom or dad to sleep with her, but we never had the time.  Oh, how I wish I could go back and do it all again.  I would never be too busy to lay down with her.

Some people say we have it made because we won the law suit against the YMCA and received a settlement, that was put into a trust, for all of Mackenzie's future needs.   I want them to know that the money in no way replaces the companionship of my child.  Would you trade a beloved child for the trip of a lifetime or a large sum of money (or any sum of money)?  Not me -I would give everything I am and everything I have, to make her whole again- to hear her speak to me, to return a hug, to enjoy her personality.  Don't get me wrong, I still love her with all my heart, but at the same time, I miss her immensely. 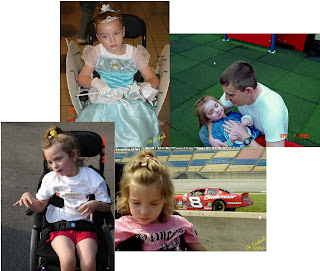 I cherish the rare smile, and the even more rare laugh not only because it reminds of the child she had been, but also because, for a short while I know that she is happy.

Everything I do, I do without the acknowledgement that she evens knows who I am.
She is my child, I love her,  I brought her into this world, and I will see her through this for as long as I am able. 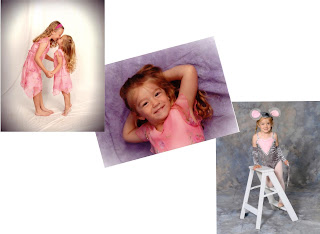 Posted by Unknown at 2:04 PM No comments:

Happy 14th Birthday my dearest Mackenzie.  It's hard to believe it's been 10 years since you were running and laughing and hugging and talking.  You will always be my angel baby.

She doesn't use it consistently but she is learning and may some day feel motivated enough to talk to us.

Posted by Unknown at 1:37 PM No comments:

We love you, Natasha 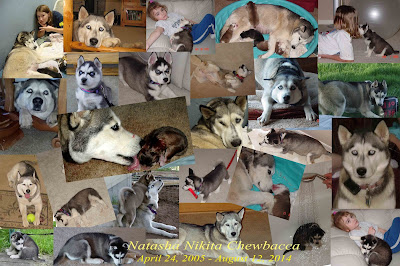 Mackenzie beloved Siberian Husky, Natasha Nikita Chewbacca, was hit by a vehicle on the road near in front of our property.  She was a loyal companion and friend to the entire family.  In addition to many years of joy and happiness, Natasha gave us two litters of puppies.  Two of her puppies remain in our home while many of the others are in the homes of our friends.  You will be terribly missed, Natasha. 😢
Posted by Unknown at 2:23 PM No comments:


Mackenzie got a new wheelchair last September as she started the 7th grade. She has already out grown it and refuses to sit properly in it.  She likes to push her butt out as far as possible and sit on her tail bone.  We have not devised a way to prevent her from doing this, so we have had her fitted for (and ordered) a custom molded seat for her chair.  I will provide updates on how this is working after we get it in a month or so.

She has grown so much - she now comes up to my nose.  Of course, this makes it more difficult to care for her,  but she ours angel and we will do what we can to give her a good life.

It was also extremely hot the first few weeks of school and without air conditioning this creates a miserable situation for any student.  Due to Mackenzie's brain injury her body fails to regulate its temperature the way that it needs.  Hot environments make her physically ill (vomiting).  I was so pleased with the school officials and their willingness to accommodate Mackenzie's condition by placing her in one of the few air conditioned rooms (computer lab or band) during these times of intense heat.  This year the district is running the elementary and middle schools on half days for the first 2 weeks in anticipation of the heat.

In February, Mackenzie got a new baby sister.  She has added an element of entertainment to Mackenzie's life.

Unfortunately, being a true teenager, Mackenzie has several bouts of irritability.  This makes her difficult to be around because her only (chosen) mode of communication is to yell and scream and cry.  To ease the tension in our home, Mackenzie has been prescribed a synthetic marijuana drug by the name of Marinol.  We have been using it daily for about 2 weeks now and I have to admit - it makes a difference!  She has been consistently happy (or even content) more now than she has been in years.

Mackenzie's spine and hips were X-rayed recently (last time was in 2009).  Luckily, there is no significant spine curvature or hip displacement.  In addition, just like all doctors when they first meet her, the doctor commented on what excellent shape she is in this far out from her injury.  She has very little issues with tone and no spasticity.

She stopped Occupational Therapy because she was no longer making progress and her Physical Therapy has been cut back because her progress slowed.

I must say though that I am EXTREMELY pleased with the staff at her middle school.  They do so much for her and with her!  They put her in her walker (or an adaptive tricycle) several times a week.  They created an adaptive PE class for her and her classmates.  They include her as much as possible with the regular PE activities.   I am sad that this will be her last year at this school as she will be moving to high school in the fall of 2015.

Posted by Unknown at 1:33 PM No comments: